Easter and the Sacrifice of Christ 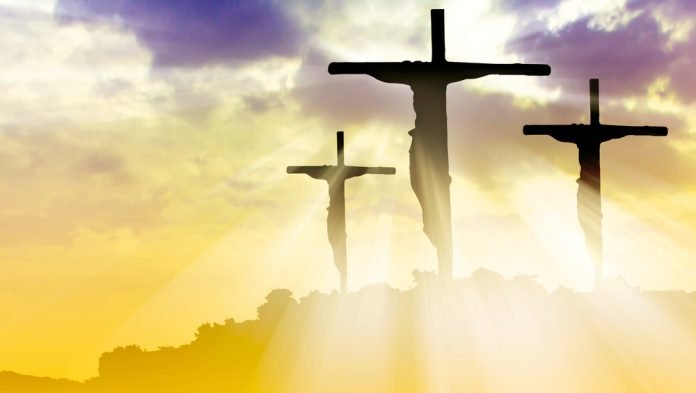 Awhile back while reading Rediscover Catholicism by Matthew Kelly, I read the prologue (included below), and after I finished, I set the book down and reflected on it.   The same thought kept coming to me… What an interesting way to think about the sacrifice Jesus Christ made for us, and how appropriate to think of it as described, given the events the world has gone through over the past year concerning the Coronavirus.  What would you do, would you sign the consent form described?

(from this point forward: content is from the prologue of Rediscover Catholicism by Matthew Kelly)

Imagine this. You're driving home from work next Monday after a long day. You turn on your radio and you hear a brief report about a small village in India where some people have suddenly died, strangely, of a flu that has never been seen before. It's not influenza, but four people are dead, so the Centers for Disease Control is sending some doctors to India to investigate. You don't think too much about it — people die every day — but coming home from church the following Sunday you hear another report on the radio, only now they say it's not four people who have died, but thirty thousand, in the back hills of India. Whole villages have been wiped out and experts confirm this flu is a strain that has never been seen before. By the time you get up Monday morning, it's the lead story. The disease is spreading. It's not just India that is affected. Now it has spread to Pakistan, Afghanistan, Iran, Iraq, and northern Africa, but it still seems far away. Before you know it, you're hearing this story everywhere. The media have now coined it "the mystery flu."

The President has announced that he and his family are praying for the victims and their families, and are hoping for the situation to be resolved quickly. But everyone is wondering how we are ever going to contain it. That's when the President of France makes an announcement that shocks Europe: He is closing the French borders. No one can enter the country, and that's why that night you're watching a little bit of CNN before going to bed. Your jaw hits your chest when a weeping woman's words are translated into English from a French news program: There's a man lying in a hospital in Paris dying of the mystery flu. It has come to Europe. Panic strikes. As best they can tell, after contracting the disease, you have it for a week before you even know it, then you have four days of unbelievable symptoms, and then you die. The British close their borders, but it's too late. The disease breaks out in Southampton, Liverpool, and London, and on Tuesday morning the President of the United States makes the following announcement: "Due to a national security risk, all flights to and from the United States have been canceled. If your loved ones are overseas, I'm sorry. They cannot come home until we find a cure for this horrific disease." Within four days, America is plunged into an unbelievable fear. People are wondering, What if it comes to this country? Preachers on television are saying it's the scourge of God. Then on Tuesday night you are at church for Bible study, when somebody runs in from the parking lot and yells, "Turn on a radio!" And while everyone listens to a small radio, the announcement is made: Two women are lying in a hospital in New York City dying of the mystery flu. It has come to America. Within hours the disease envelops the country.

People are working around the clock, trying to find an antidote, but nothing is working. The disease breaks out in California, Oregon, Arizona, Florida, Massachusetts. It's as though it's just sweeping in from the borders. Then suddenly the news comes out: The code has been broken. A cure has been found. A vaccine can be made. But it's going to take the blood of somebody who hasn't been infected. So you and I are asked to do just one thing: Go to the nearest hospital and have our blood tested. When we hear the sirens go off in our neighborhood, we are to make our way quickly, quietly, and safely to the hospital. Sure enough, by the time you and your family get to the hospital it's late Friday night. There are long lines of people and a constant rush of doctors and nurses taking blood and putting labels on it. Finally, it is your turn. You go first, then your spouse and children follow, and once the doctors have taken your blood they say to you, "Wait here in the parking lot for your name to be called." You stand around with your family and neighbors, scared, waiting, wondering. Wondering quietly to yourself, What on earth is going on here? Is this the end of the world? How did it ever come to this? Nobody seems to have had their name called; the doctors just keep taking people's blood. But then suddenly a young man comes running out of the hospital, screaming. He's yelling a name and waving a clipboard. You don't hear him at first. "What's he saying?" someone asks. The young man screams the name again as he and a team of medical staff run in your direction, but again you cannot hear him. But then your son tugs on your jacket and says, "Daddy, that's me. That's my name they're calling." Before you know it, they have grabbed your boy. "Wait a minute. Hold on!" you say, running after them. "That's my son." "It's okay," they reply. "We think he has the right blood type. We just need to check one more time to make sure he doesn't have the disease." Five tense minutes later, out come the doctors and nurses, crying and hugging each another; some of them are even laughing. It's the first time you have seen anybody laugh in a week. An old doctor walks up to you and your spouse and says, "Thank you. Your son's blood is perfect. It's clean, it's pure, he doesn't have the disease, and we can use it to make the vaccine." As the news begins to spread across the parking lot, people scream and pray and laugh and cry.

You can hear the crowd erupting in the background as the gray-haired doctor pulls you and your spouse aside to say, "I need to talk to you. We didn't realize that the donor would be a minor and we . . . we need you to sign a consent form." The doctor presents the form and you quickly begin to sign it, but then your eye catches something. The box for the number of pints of blood to be taken is empty. "How many pints?" you ask. That is when the old doctor's smile fades, and he says, "We had no idea it would be a child. We weren't prepared for that." You ask him again, "How many pints?" The old doctor looks away and says regretfully, "We are going to need it all!" "But I don't understand. What do you mean you need it all? He's my only son!" The doctor grabs you by the shoulders, pulls you close, looks you straight in the eyes, and says, "We are talking about the whole world here. Do you understand? The whole world. Please, sign the form. We need to hurry!" "But can't you give him a transfusion?" you plead. "If we had clean blood we would, but we don't. Please, will you sign the form?"

I have spent hundreds of hours reflecting on where we are in our journey as a Church, and one thing that has become startlingly clear is that we have forgotten our story. What would you do? In numb silence you sign the form because you know it's the only thing to do. Then the doctor says to you, "Would you like to have a moment with your son before we get started?" Could you walk into that hospital room where your son sits on a table saying, "Daddy? Mommy? What's going on?" Could you tell your son you love him? And when the doctors and nurses come back in and say, "I'm sorry, we've got to get started now; people all over the world are dying," could you leave? Could you walk out while your son is crying out to you, "Mom? Dad? What's going on? Where are you going? Why are you leaving? Why have you abandoned me?" The following week, they hold a ceremony to honor your son for his phenomenal contribution to humanity … but some people sleep through it, others don't even bother to come because they have better things to do, and some people come with a pretentious smile and pretend to care, while others sit around and say, "This is boring!" Wouldn't you want to stand up and say, "Excuse me! I'm not sure if you are aware of it or not, but the amazing life you have, my son died so that you could have that life. My son died so that you could live. He died for you. Does it mean nothing to you?"

Perhaps that is what God wants to say. Father, seeing it from your eyes should break our hearts. Maybe now we can begin to comprehend the great love you have for us.

A New Coadjutor for Montana: Should We See More Of This?
Christ is Still the Good Shepherd: An Update on Our Apostolate
With Pierre's Replacement Looming, Here's How the U.S. Church Looks Going Into Spring